Reports of a fire aboard the Russian aircraft carrier Admiral Kuznetsov are untrue. This was announced on Wednesday, January 27, by the head of the press service of the Zvezdochka ship repair center, Evgeny Gladyshev. 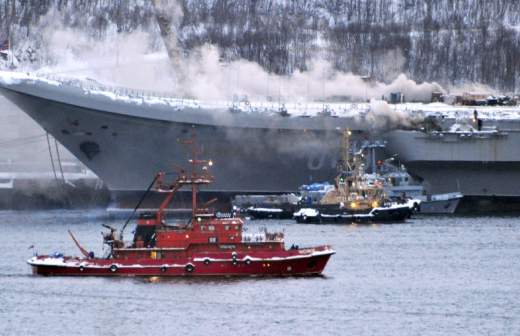 Fire in paints: what caused an emergency on the aircraft carrier “Admiral Kuznetsov” The fire on board the cruiser began due to the ingress of scale into the remnants of flammable liquids on the deck

“There was a malfunction in the operation of technological equipment, which did not lead to a fire and did not affect the progress of the ship’s repair in any way,” Gladyshev said in an interview with RIA Novosti.

The day before, the media reported that an acetylene cylinder allegedly exploded on the ship during gas welding.

Now “Admiral Kuznetsov” is under repair and modernization at the 35th shipyard in Severomorsk.

The fire on the ship occurred in December 2019. Then two servicemen were killed, another 14 people were injured. A criminal case was initiated into the incident.

As reported in the summer of 2020, the general director of the United Shipbuilding Corporation (USC) Alexei Rakhmanov, intensive work was launched on the aircraft carrier. Its handover to the Russian Navy is still scheduled for 2022.