The heavy rocket “Angara-A5” was launched from the Plesetsk cosmodrome in the Arkhangelsk region, the Russian Defense Ministry reported on Monday, December 14. 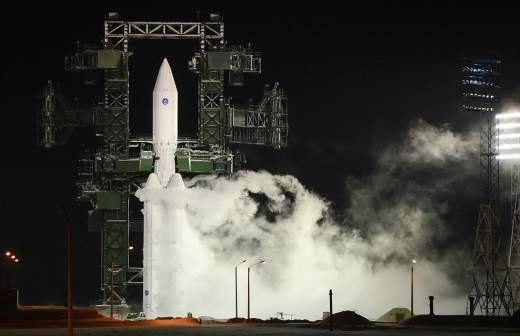 Getting stuck in the “Angara”: problems of the production of the latest missiles What happens to the most promising Russian carrier

“The combat crew of the Space Forces of the Aerospace Forces carried out a test launch of the Angara-A5 heavy-class carrier rocket with the overall mass model of the payload,” the message says.

As specified in the department, the launch took place at 8:50 am, all pre-launch operations and the launch of the rocket took place in normal mode.

Control over the launch and flight of the rocket was carried out by ground means of the Space Forces of the Aerospace Forces, the Ministry of Defense notes.

“12 minutes after the launch, the orbital block consisting of the Briz-M upper stage and the non-detachable overall mass model of the payload separated from the third stage of the Angara-A5 launch vehicle,” the military department reported.

Further insertion of the orbital block into the target geostationary orbit (about 36 thousand km) will be carried out with the help of the Breeze-M upper stage according to a nine-hour scheme, the message adds.

In October it was reported that the launch of the “Angara” from the Plesetsk cosmodrome is scheduled for November 28. It was later postponed due to a remark during trials at the launch site.

On November 17, Russian Defense Minister Sergei Shoigu said that by 2025 Russia would be able to annually carry out up to 20 launches of Angara carrier rockets of light and heavy classes.

The first test launch of the Angara-A5 launch vehicle was carried out in 2014.