The Russian Ministry of Defense on Tuesday, November 24, published a video of the US Navy destroyer John McCain, which violated the Russian border in Peter the Great Bay (near Vladivostok).

The incident became known earlier that day. The violation of the state border was stopped by the large anti-submarine ship “Admiral Vinogradov”. It was clarified that the American ship went 2 km beyond the border line. The Russian military warned the Americans that they were ready for a ramming maneuver. After that, the destroyer went into neutral waters. 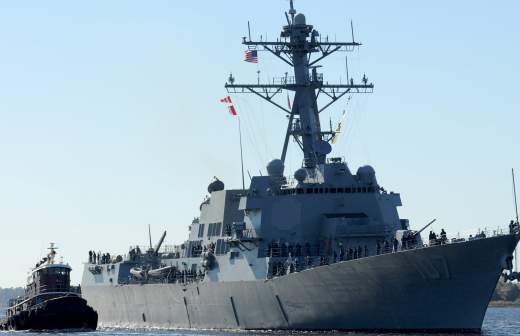 A game of maneuvers: what does the appearance of US ships in the Baltic mean? American destroyers in the Baltic and Black Seas test the effectiveness of the interaction of Russian forces

Then the US Navy Seventh Fleet announced that “John McCain” had exercised the right to free navigation. The Americans said that the destroyer allegedly carried out the Operation to Ensure Freedom of Navigation (FONOP) in accordance with international law.

In addition, the United States stated that with this operation they allegedly demonstrated that “this zone is not part of Russian territorial waters.” The US, according to them, does not agree with Russia that the Peter the Great Gulf has the legal status of “historical” in accordance with international law.

The former commander of the Black Sea Fleet, Admiral Vladimir Komoedov, called the incident rudeness. According to him, the Russian ship had the right in this case to go to the ram.