Director of the Bureau of Political-Military Analysis Alexander Mikhailov told Izvestia on November 11 about the new Russian nuclear command post. 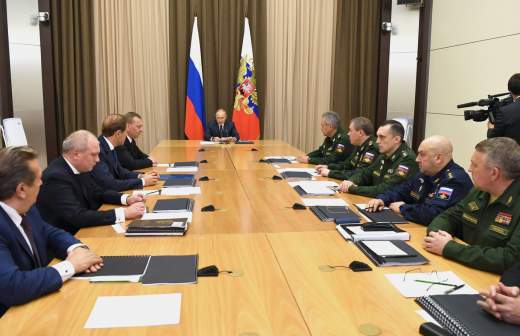 The so-called nuclear briefcase is a communication device that is part of the automated control system for strategic nuclear forces, Mikhailov said.

It was about this system that Putin spoke, focusing on its reliability and efficiency, as well as on the fact that the combat readiness of the Russian nuclear triad directly depends on its work, the expert noted.

The creation of a super-protected control center for Russia’s nuclear forces meets the challenges of the time as never before, Mikhailov believes.

“The US withdrawal from practically all international military agreements, including the threat of the Americans withdrawing from START-3, looming over the world, requires the Russian military to calculate all possible scenarios for the development of events. Including a massive nuclear strike by the enemy on the main military and infrastructural strategic facilities on the territory of Russia, ”the expert said.

According to him, in the event of the most catastrophic development of events, a protected command center of strategic nuclear forces should function and manage the nuclear triad. Even when inflicting a nuclear strike on the very territory where this object is located.

In addition, the protected site must be of considerable size. To accommodate equipment, life support systems and several thousand people in the event of a nuclear apocalypse, the military political scientist added.

Meanwhile, the “nuclear briefcase” will always remain with the Russian president, at least as long as the world maintains a condition for nuclear destruction, Mikhailov concluded.

On the eve of November 10, Putin stressed that the arms control system in the world is degrading and shaking. The fate of the treaty on the limitation of strategic offensive arms (START), which expires in February 2021, also remains unclear, he also recalled.