The Kremlin believes that the question of a possible missile fall in Dagestan, which was previously reported by the media, should be asked to the military. This was announced to reporters by the press secretary of the President of Russia Dmitry Peskov on Thursday, October 15.

“It is necessary to address the question to the military. Listen, this is a question, first of all, which concerns the military department, ”said Peskov. 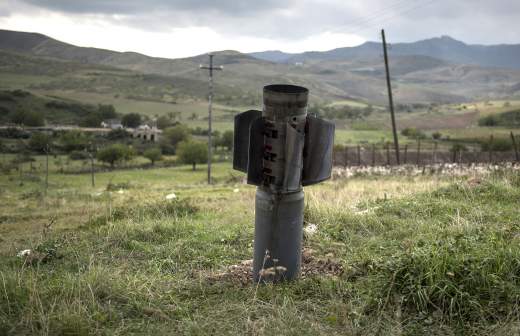 And a truce is not enough: the fighting in Karabakh has returned to the previous level of escalation Russia calls on both sides to adhere to the agreements, but the date of the upcoming meetings has not yet been announced

Earlier, on October 8, the Weekdays Kavkaza portal reported that an unidentified rocket fell and exploded in the Agul region of Dagestan. According to the newspaper, she fell about 5 km from the village of Chirag.

Local residents told the portal that houses were shaken from the blast wave and a car alarm went off. Several villagers went to the explosion site near the border with the Dakhadayevsky district and found there a crater 15–20 m in diameter, as well as, presumably, the debris of a rocket.

The published photographs show a funnel around which the grass is burnt.

As noted by the REN TV channel, on the same day the explosives from the FSB and the Ministry of Internal Affairs went to the scene of the incident in the Agul region.

Agul district is located in the south of Dagestan, not far from the border with Azerbaijan.

Cases of the flight of shells from the conflict zone in Nagorno-Karabakh to other countries have already been recorded. On October 7, the Iranian Foreign Ministry reported that several shells and rockets fired by the Azerbaijani army fell on the territory of Iran. According to the deputy head of the Iranian police, Qasem Rezai, Baku has officially apologized for the incident.

Another aggravation of the military conflict between Baku and Yerevan in Karabakh took place on September 27. Armenia and Azerbaijan made each other responsible for what happened.