Russian naval sailors received “coastal minesweepers”. A fundamental decision was made to equip the naval engineering regiments with Uran-6 combat sapper robots. With their help, it is possible, with maximum safety for personnel, to clear the coast and land from explosive objects. Now the ground forces already have several dozen such remotely controlled vehicles. They were successfully used for mine clearance in Syria, Nagorno-Karabakh and Chechnya. Thanks to the Uranus, Russian sappers have destroyed thousands of explosive devices, experts said.

It was decided to equip all naval engineering regiments with mobile robotic demining systems MRTK-R “Uran-6”, sources in the Ministry of Defense told Izvestia. With the help of tracked remote-controlled vehicles, they will clear the coast and land from mines. If necessary, they can also be attached to the formations of the Marine Corps. The capabilities of the technology make it possible to use it for eliminating the consequences of industrial accidents. The first complexes have already entered service with the Black Sea Fleet.

Serial delivery of “Uran-6” to ground engineer units began two years ago. More than 20 vehicles have already been received. In August 2020, the Ministry of Defense announced the holding of the largest engineering exercises in history using robotic systems. At the test site in the Astrakhan region, 10 remote-controlled Uranos simultaneously created a passage in a conventional minefield. Together with them, robotic firefighters and engineering barrage vehicles operated. 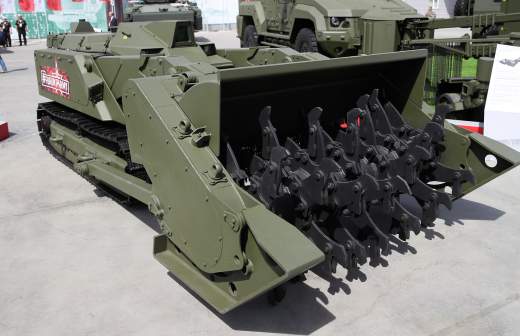 Born to crawl: ground robotic hunters have been assigned a place in the troops The first unmanned systems arrive in the engineer units

The curb weight of “Uran-6” reaches 7 tons. On a tracked lightly armored vehicle, you can hang three replaceable trawls designed to work on different types of soil, as well as a dozer blade and a manipulator. This equipment allows the complex to deal not only with mine clearance, but also with the clearing of obstacles. Nevertheless, the main purpose remains the destruction of explosive devices, primarily anti-personnel mines. It is stated that on flat terrain, one unit of equipment replaces 20 sappers.

Uranus-6 is unable to act independently. It is controlled remotely by radio communication. In this case, the operator can be at a distance of up to 800 m from the robot. This completely protects it from the hazards associated with mine clearance.

“The naval engineering service combines both combat and civilian components,” Admiral Valentin Selivanov, former chief of the Main Staff of the Navy, told Izvestia. “On the one hand, it provides garrisons. It is in charge of public utilities. On the other hand, it has combat units, in particular sappers.

Previously, during amphibious operations, they used assault charges of demining installations to ensure the landing of combat vehicles and marines, the admiral explained.

– The robot will most likely be able to operate at shallow depths off the coast – to detect mines, place buoys designating them and destroy explosive objects, the expert noted. – This is a good decision in the current environment. Our fleet operates in the Syrian region, and it may work in other regions as well. And the Russian coast also needs to be protected. Of course, minesweepers or aircraft will not be able to quietly place mines on it, but underwater saboteurs can place small-sized ammunition. In this case, the robot will also be useful. I suppose that the naval version of the complex will be additionally improved taking into account the maritime specifics.

Work on the new robotic complex started back in the early 2010s. And in the summer of 2014, the test “Uran-6” was sent for military trials in Chechnya and Ingushetia. The technician was instructed to clear the old minefields of farmland. On 60 hectares, the complex destroyed explosive devices with a total weight of 40 kg.

In 2015, Uran-6 was officially accepted for supply. The first samples were sent to the International Mine Action Center of the Armed Forces of the Russian Federation, intended for humanitarian operations abroad. 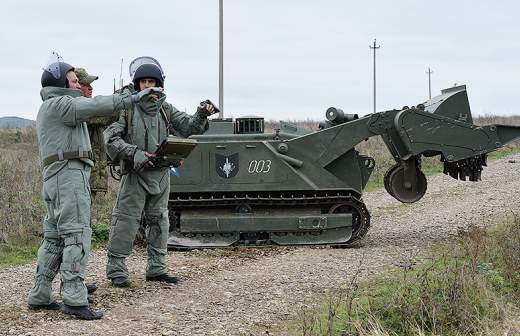 Southern “Uranus”: the troops of the Southern Military District will receive sapper and strike robots Unmanned ground systems have been finalized taking into account the operation in Syria

Since the spring of 2016, specialists from the mine action center have been working in Syria. An engineering robot participated in the clearance of explosives in Palmyra and Aleppo after they were freed from terrorists. It was there that it was tested in conjunction with passive exoskeletons EO-1, which protected the operators. So it was easier for sappers to work with the machine for hours in hot climates, having behind them communication and control equipment with a total weight of 20 kg.

Recently, such a machine was used in Nagorno-Karabakh. Uran-6 cleared cities and villages from unexploded ordnance and mines, as well as roads between Russian peacekeepers’ checkpoints.

In 2018, the Ministry of Defense announced the modernization of the complex with the help of a new mobile platform with a hydrolift based on the four-axle KamAZ truck. It allows you to unload and load heavy robots without assistance. This is important for autonomy when operating abroad, in war zones and man-made disasters. The compact dimensions of the complex and the robot make it easy to transfer it by military transport aircraft to the desired location.

In addition to the sapper robot, the Uranov family also includes the even heavier Uran-14, designed to extinguish fires in artillery depots. It was developed by the Croatian company DOK-ING. There is also a domestic filling in it – reconnaissance and assault “Uran-9”, armed with anti-tank missiles and a 30-mm automatic cannon.