Su-34 fighter-bombers in the Chelyabinsk region have worked out elements of combat maneuvering. This was announced on Tuesday, February 2, by the press service of the Central Military District (CVO).

In particular, the pilots demonstrated “loops” with a turn at 90 degrees, “slides” at low and medium altitudes, “barrels” and “pods”. In total, in addition to the crews, more than 200 servicemen of the control and flight support group were involved in the development of the combat maneuvering program. 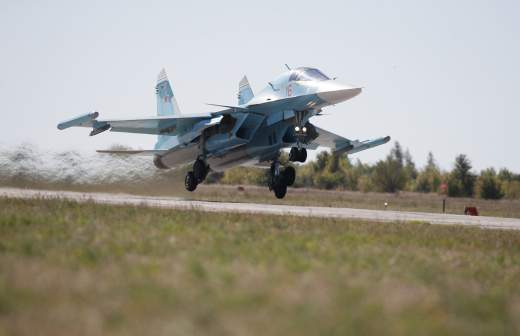 Su-34 Changes Profession: Bomber Crews Will Be Learned to Shoot Down Aircraft Pilot Training Program Will Include High-Altitude Air Combat in the Stratosphere

“During dynamic maneuvering, the overload in the cockpit reached 7 units. The mastered flight program will allow the instructor pilots of the Chelyabinsk Aviation Regiment to prepare young flight personnel for the conduct of hostilities in the air and the destruction of air targets of the “fighter” type, – said the press service in the Central Military District.

In May 2020, the Russian Ministry of Defense agreed on the details of the contract for a new batch of the latest Su-34 bombers. It is expected that by 2027, the troops will receive at least 76 vehicles.

At the end of December 2019, it became known that a prototype of the modernized 4 ++ generation Su-34 fighter-bomber would be created by 2022. Among the main changes are an improved radar station, a new navigation system, as well as information display systems in the cockpit.