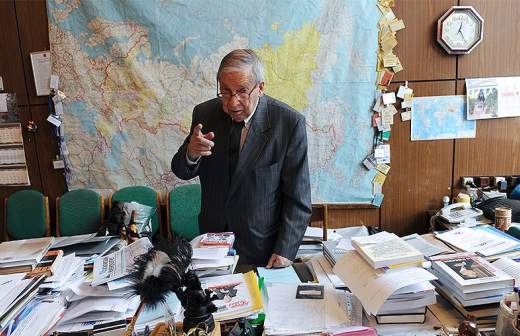 “Robots are unlikely to replace living journalists” President of the Faculty of Journalism of Moscow State University Yasen Zasursky – about a sensitive heart, Gagarin’s meeting and faith in Izvestia

“The Armed Forces, the leadership of the Ministry of Defense, all our officers from Kaliningrad to Kamchatka have great respect for your work, for your work aimed at maintaining morale and educating our soldiers, officers and educational institutions in the armed forces. And the most important thing is honest and truthful information, ”he quotes the head of the RT department.

The head of the Russian military department awarded the Order of Friendship to the correspondent of the main editorial office of information and information-analytical programs of the NTV Information Directorate, Alexei Ivliev, Zvezda TV channel reports.

He presented the badge “Honored Journalist of the Russian Federation” to the military observer of “Komsomolskaya Pravda” Viktor Baranets.

The medals “For Strengthening the Military Commonwealth” were awarded to the general producer of the Zvezda TV channel Boris Yanovsky, as well as the producers of the Russia 1 and Russia 24 TV channels Alesya Alekseeva, Dmitry Naida and Maria Novikova.

The Government Prize in the field of mass media is awarded to workers and creative teams of Russian and foreign mass media in Russian for significant professional achievements. 10 prizes are awarded annually in the amount of 1 million rubles.