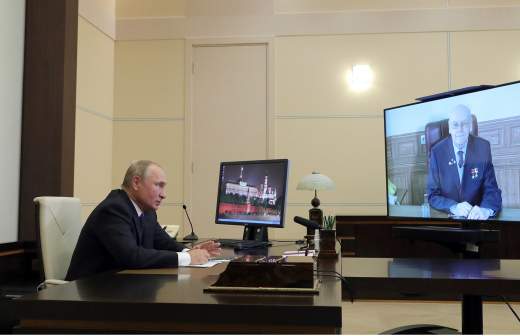 In the “Avangard” of Russia: the legendary designer was awarded the highest award of the country Rocket developer Herbert Efremov received the Order of St. Andrew the First-Called for the creation of a system that was ahead of its time for many years

“By the end of the year in the Orenburg region the infrastructure will be ready for putting on alert two more missiles of the Avangard complex,” RIA Novosti quotes him.

According to him, when the Avangard block changes its trajectory, it is impossible to predict where it will be, as well as to send an anti-missile.

On September 23, Russian President Vladimir Putin compared the ability of the Avangard hypersonic combat complex to withstand ultra-high temperatures during flight with the “popsicle effect.”

On September 20, a military expert from the National Interest magazine called the Avangard missile systems, with their maneuvering ability and hypersonic speed, a serious challenge for the United States.

The Russian Avangard intercontinental missile system is equipped with a maneuvering hypersonic unit capable of accelerating to 33,000 km / h. The winged complex performs deep maneuvering while moving towards the target. The block deviates to the sides and in height by several thousand kilometers. This ability to maneuver makes the missile invulnerable to air defense and ballistic missiles.