The military will increase monitoring of the situation in the Baltic Sea. To do this, it was decided to attract unique ultra-long-range anti-submarine aircraft Tu-142 of the Northern Fleet. Previously, these machines, designed to search for submarines and surface ships, operated in the Atlantic and polar regions. Tu-142 (NATO codification: Bear – “Bear”) is able to spend a long time over the patrol area. The aircraft are equipped with modern reconnaissance equipment and a unique sighting system. The latter allows you to hit sea, land and even underwater targets with high accuracy, experts noted. The strengthening of the air group in the Baltic is taking place against the backdrop of unfriendly visits by NATO ships to the water area.

Will see under water

A fundamental decision to attract Tu-142 to patrol the Baltic Sea has been made, a source in the military department told Izvestia. True, planes will not become regular guests in the skies in the northwest of the country. They will only be recruited to patrol when necessary. The first flights of machines over the Baltic were held as part of the Ocean Shield 2020 exercise. They proved to be an effective means of detecting ships. 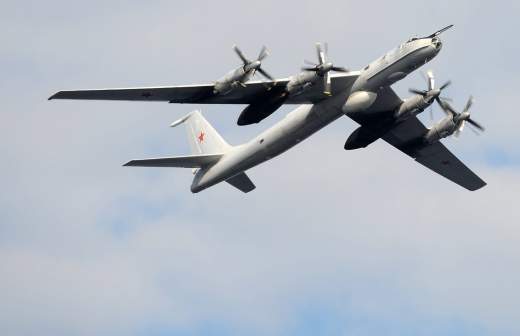 High-flying sniper: Tu-142 will destroy targets under water and on the ground “Submarine Killer” equipped with a high-precision guidance system

During the maneuvers, part of the flights took place at low altitudes. In addition, at one of the stages of the Tu-142, as part of a joint air group with fighters, they participated in the search for NATO aircraft. Their tasks included the detection and identification of enemy targets.

Earlier, the Commander-in-Chief of the Navy, Admiral Nikolai Evmenov, said that during the exercises, 10 anti-submarine aircraft flew to the far sea zone. The geography was extensive – the Tu-142 passed over the waters of the Black, Baltic, Norwegian and Chukchi Seas, the Beaufort Sea, along the Northern Sea Route and over the neutral waters of the Pacific Ocean.

The Ocean Shield 2020 naval exercise took place in July-August and was attended by the forces of four fleets. From the naval aviation, 33 aircraft and 15 helicopters, as well as unmanned aerial vehicles, were involved. 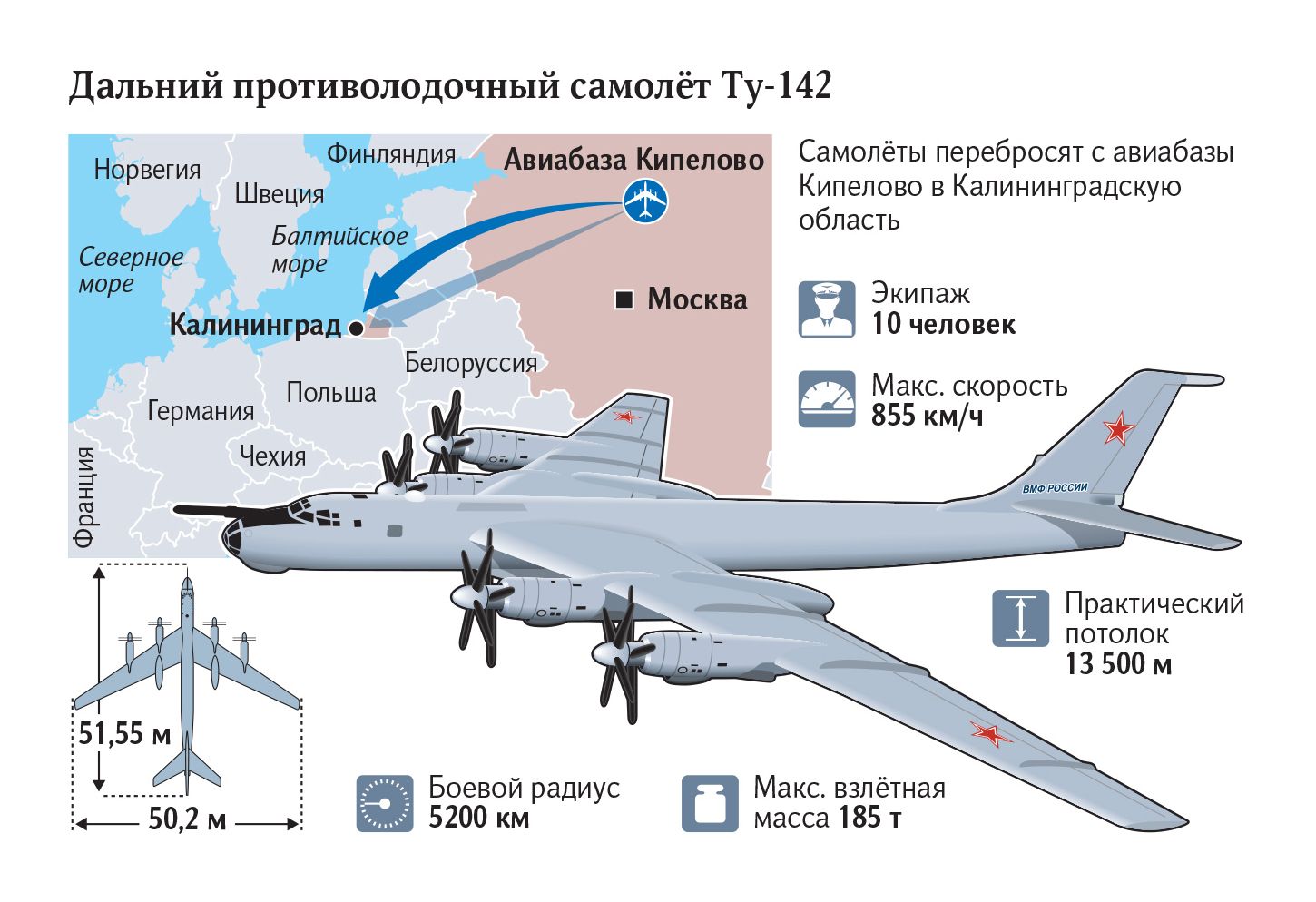 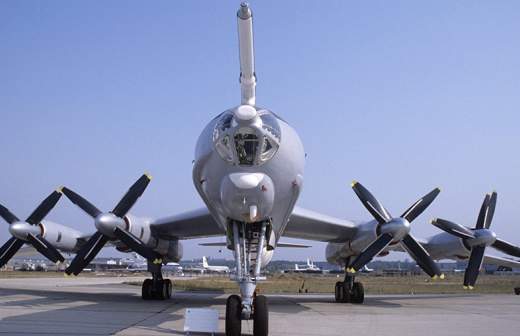 In a flock with drones: planes and UAVs together will track submarines Hunters for Tu-142 “steel sharks” received support drones

The machine was created on the basis of the Tu-95 turboprop strategic bomber. In NATO countries, the aircraft, developed back in the 1950s, received the designation “Bear”. The Tu-142 is equipped with a two-story pressurized cabin, in the upper part of which the crew is accommodated, and in the lower part there are technical compartments. The middle part of the fuselage is occupied by two weapon compartments, which contain means for searching and hitting targets – acoustic beacons, torpedoes, missiles, mines, depth and conventional bombs. Also, aircraft can carry up to eight powerful anti-ship missiles. There are nine people in the carriage. The combat load is more than 11 tons. In total, in 1968-1994, about a hundred Tu-142 of various modifications were built.

Several years ago, the Tu-142 underwent modernization, during which they were equipped with a high-precision sighting system SVP-24 “Gefest”. It automatically calculates the trajectory of the ammunition flight to the target, taking into account the speed, altitude and meteorological conditions. With the new equipment, the Tu-142 can track not only nuclear submarines, but also surface ships.

The new equipment, which was installed on the plane, must be tested in different conditions, the ex-chief of the main headquarters of the Navy, Admiral Valentin Selivanov, explained to Izvestia.

– Tu-142 is designed to search for submarines in the ocean, – said the expert. – The Baltic Sea is a relatively small area. But if there is intelligence that Swedish or German submarines are operating there, then it makes sense to check them. Moreover, there are no diesel submarines in the ocean, only in the Baltic. It is there that the capabilities of the new equipment should be tested. In addition, the presence of our aircraft will demonstrate to foreign countries that their submarines will not go unnoticed.

Since 2014, US Navy ships have been regularly approaching the Russian Baltic and Black Sea coasts. On September 14, the Arleigh Burke-class destroyer Ross entered the Baltic Sea. This ship is equipped with the Aegis combat information and control system, launchers with Tomahawk cruise missiles, anti-aircraft and anti-ship missiles, and a 127-mm artillery mount. The Baltic Fleet deployed a ship group to escort the destroyer. 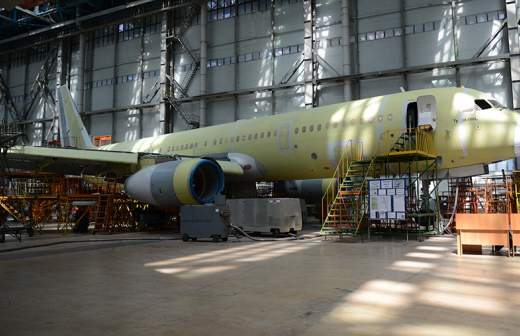 Kozyrnoy Tu: anti-submarine aircraft will be made on the basis of a passenger aircraft A candidate for a new aircraft for the naval aviation of the Russian Navy has been determined

– If NATO ships come to our shores, why can’t we send our aviation to the Baltic Sea? – said the vice-president of the Academy of Geopolitical Problems, Colonel Vladimir Anokhin. – This is a completely adequate step by the country’s leadership. And for domestic pilots – a good training school. Subsequently, if necessary, they will be able to constantly work in this region.

In September, NATO warships, including the US destroyer Franklin Roosevelt, entered the Black Sea.

In addition to the regular maneuvers of warships off the western shores of the Russian Federation, military aircraft of the alliance and its allies regularly appear here. In late August and early September, Russian Su-27 fighters repeatedly raised American B-52H strategic bombers and reconnaissance aircraft from the United States, Denmark, Germany and Sweden to intercept. According to the commander-in-chief of the Russian Aerospace Forces, Lieutenant General Sergei Surovikin, in the period from August 28 to September 4, B-52Hs trained to reach the cruise missile launch lines and conducted simulated firing in the Baltic, in the Black and Azov Seas, as well as in the Arctic. Their targets were objects in the Kaliningrad region, the Southern Military District and in the north of the country. According to Izvestia sources in the military department, Russian air defense systems timely detected all targets, including those at over-the-horizon range.