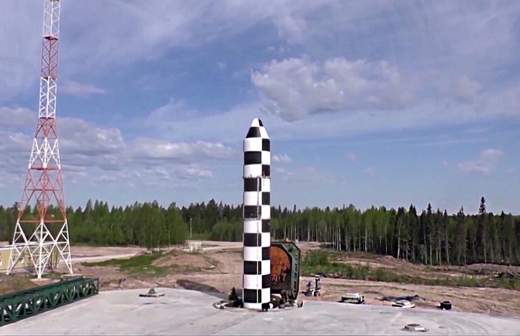 Measure the nomad: characteristics of the Sarmat ICBM have become known The missile is to replace the RS-20V Voevoda ICBM, known in the West as Satan

“At present, industrial enterprises continue to set readiness for state flight tests of the Sarmat missile system. Already today, the Uzhur missile formation has begun work on preparing the head missile regiment for rearmament. It is planned to be put on alert in 2022, ”the commander of the Strategic Missile Forces noted.

The Sarmat (RS-28) will replace the world’s heaviest strategic missile Voevoda (according to NATO classification – Satan, RS-20V). Development work on the Sarmat project began in 2011. The new missile will be capable of attacking targets both through the North Pole and through the South Pole, overcoming missile defense systems. The rocket is being developed by the Makeyev Center and will be produced at Krasmash.

The Russian advanced missile system “Sarmat” with a heavy liquid-propellant intercontinental ballistic missile will be able to attack targets through the North and South Poles, overcoming the enemy’s anti-missile defense systems.

In January, the Ministry of Defense announced one hundred percent equipping the Strategic Missile Forces with new missile systems by 2024. Thus, the troops “will cross the line beyond which there will be no Soviet-made missile systems in combat.”

Now in the combat composition of the missile forces there are seven types of missile systems. These are complexes of stationary (“Voevoda”, “Stilet”, “Topol-M”, “Yars”) and mobile (“Topol-M”, “Topol”, “Yars”) basing. In the near future, it is planned to re-equip the formations for the Sarmat, Avangard and Yars complexes.