The strategic exercises Kavkaz-2020 will conduct a full-scale test of the unique Terminator tank support vehicles (BMPT). The equipment will be used in several major episodes of maneuvers, sources in the Ministry of Defense told Izvestia. Among them – support for infantrymen and tankers in the offensive and defense, on the march, the fight against heavy armored vehicles of the enemy and, possibly, the battle in the city.

Based on the results of the exercises, the military department will make a final decision on the place of the new type of armored vehicles in the Ground Forces. So far, the experimental machines have been produced in a small batch of several dozen units. They are being tested in parts of the Western and Central Military Districts. 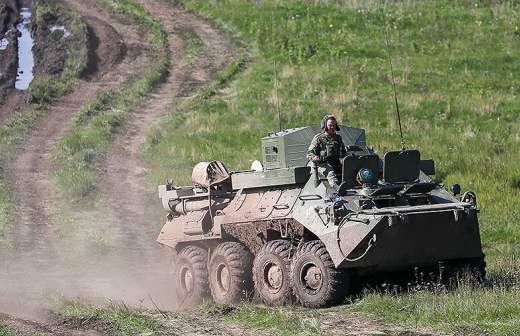 They plan to use the BMPT to support not only tank, but also motorized rifle units, sources in the Ministry of Defense told Izvestia. The task of combat vehicles will be to defeat targets that threaten heavy and light armored vehicles. These are, first of all, the calculations of anti-tank missile systems and hand grenade launchers – both on foot and operating from vehicles. Also “Terminator” will be able to deal with machine-gun points that interfere with the advance of the infantry. In the case of motorized rifle support, the vehicle will also serve as a cover for infantry fighting vehicles and armored personnel carriers, which will advance to the place where the infantry must dismount and engage the enemy.

Earlier, the head of the Main Armored Directorate, Major General Sergei Bibik, said that, according to the estimates of his department’s specialists, giving support units to BMPT motorized riflemen and tankers would increase their firepower several times.

The Kavkaz-2020 strategic command-and-staff exercises will be held from September 21 to September 26 at several training ranges of the Southern Military District. According to the Russian defense department, 80,000 military men, up to 250 tanks, 450 infantry fighting vehicles and armored personnel carriers, 200 artillery systems and MLRS will be involved in this year’s largest maneuvers.

– This is a completely new concept vehicle in the line of armored vehicles. Not only in our country, in the world there are none, ”military expert Viktor Murakhovsky told Izvestia. – Therefore, of course, its place in the battle formation and role in combined arms combat must be carefully researched and studied – what it can do, what advantages and disadvantages it has, etc. Since there were no such machines before, at large exercises it is necessary to test it in practice together with tanks, infantry fighting vehicles and armored personnel carriers, check it in operation at the front line.

BMPT is intended for fire support of the first echelon of the battle formation when attacking the enemy. And how to implement this in practice, it is necessary to find out on maneuvers, Viktor Murakhovsky emphasized. 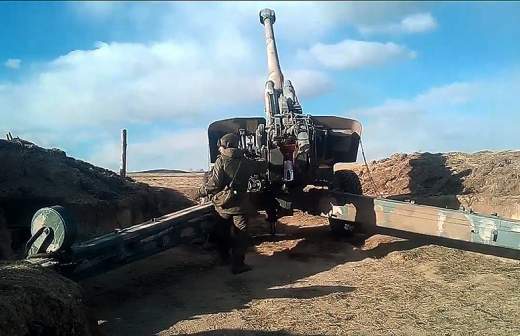 – Exercise “Kavkaz-2020” will become such a test event. In the episodes with live shooting, the car can show itself in all its glory, – the expert concluded.

The decision to purchase BMPT was preceded by two decades of disputes over the need for such machines in general. The military could not find a place for them in the battle formations and decide whether to include them in the staff of tank or motorized rifle units. The fate of the technology was determined by its combat tests in Syria in 2017. According to the deputy head of the defense department, Yuri Borisov, she has proven herself very well there.

The general designer of Uraltransmash, Andrei Terlikov, stated that the BMPT was used in battles against ISIS (the organization is banned in Russia). In June 2017, one of the Terminators was spotted at the Russian Khmeimim airbase, where it was shown to Syrian President Bashar al-Assad. In the same summer, the first contract from the Russian Ministry of Defense for an experimental batch of 10 vehicles followed. Since 2018, they have become an indispensable participant in the parades on Red Square, and since 2019, they are being tested in the troops at exercises on a smaller scale than the upcoming Caucasus.

The USSR began to think about the need to create a well-protected vehicle that can support tanks with fire in the mountains and cities even during the war in Afghanistan. We returned to development after the first campaign in Chechnya. But, despite the construction of several prototypes in the first decade of this century and their state tests, the vehicles did not go to the troops.

The redesigned prototype of modern Terminators was first presented at the Russian Arms Expo in Nizhny Tagil in 2013. 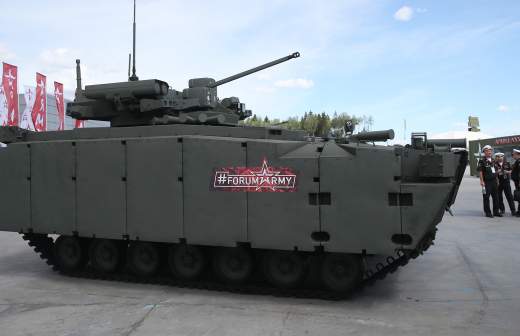 The BMPT currently in service is equipped with two 30mm 2A42 automatic cannons. In 2018, the press service of the research and production association “Techmash” reported that the company is at the final stage of creating “smart” missiles with controlled remote detonation for the Terminator. They are much more effective against infantry in cover than conventional small-caliber high-explosive fragmentation ammunition. They are much more likely to hit aerial targets, including small drones, with them. Two 30-mm automatic grenade launchers AGS-17 are also intended to “clean up” the terrain from infantry.

Four “Attack” guided missiles give the vehicle the ability to fight tanks and other armored vehicles. They, unlike most other complexes, have a supersonic flight speed, which gives the Terminator an advantage in dueling situations when every second counts.

This entire arsenal is mounted on the T-72 chassis. Therefore, in terms of mobility and security, the BMPT is not inferior to modern tanks. The powerful engine allows the car weighing 40 tons to accelerate on the highway to a speed of 60 km / h.

The armor is additionally reinforced with modular ERA at the front and sides of the vehicle. Its back is covered with anti-cumulative grilles. There is only a complex of active protection, which will be put on a promising generation of armored vehicles.

Even before the Russian army entered service, Kazakhstan purchased a small batch of BMPTs. After tests in Syria, Algeria also became interested in cars. In June of this year, photographs of the first deliveries of equipment to this country appeared. Earlier it was reported that the African state has contracted more than 300 units of domestic “Terminators”.