The coronavirus pandemic did not interfere with the holding of Army 2020, the main Russian forum of the military-industrial complex and the Ministry of Defense. The military department announced the conclusion of contracts on it worth over 1 trillion rubles, which became a new record for the exhibition. In accordance with these deals, the troops will receive more than 500 new types of equipment and over 80 thousand missiles and ammunition, and will modernize more than 100 weapons. Defense Minister Sergei Shoigu instructed some of the samples presented for the first time to be tested both at the upcoming strategic exercises and in a combat situation in Syria.

This year the exhibition was especially rich in novelties of wheeled armored vehicles. The Military Industrial Company (MIC) alone presented six new models at once. On Friday, August 28, after inspecting the military-industrial complex exposition, Sergei Shoigu ordered to test two models at the forthcoming Kavkaz-2020 command-staff exercises in September in conditions close to combat. 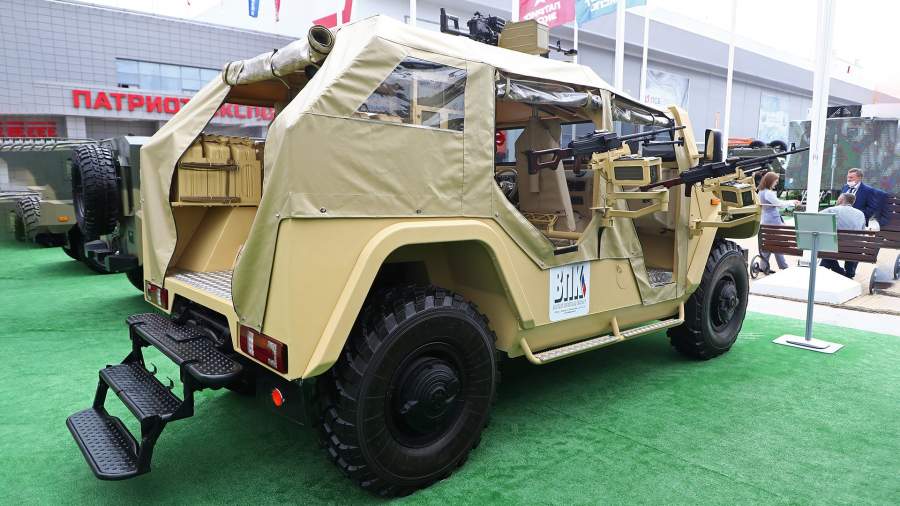 The minister was interested in the first demonstrated lightweight amphibious armored vehicle “Strela” for scouts and special forces and the well-armed “Tiger”, presented in the “buggy” version – without a roof and side panels. The vehicles were developed by the company on its own initiative, taking into account the experience of mobile combat operations in Syria.

For testing in the conditions of “Caucasus-2020”, and then to Syria, the minister also instructed to send the anti-drones “Sapsan-Konvoy” complex of the “Avtomatika” concern. The machine automatically detects and suppresses signals from satellite navigation systems. This forces the enemy’s light UAVs to fall or make an emergency landing. 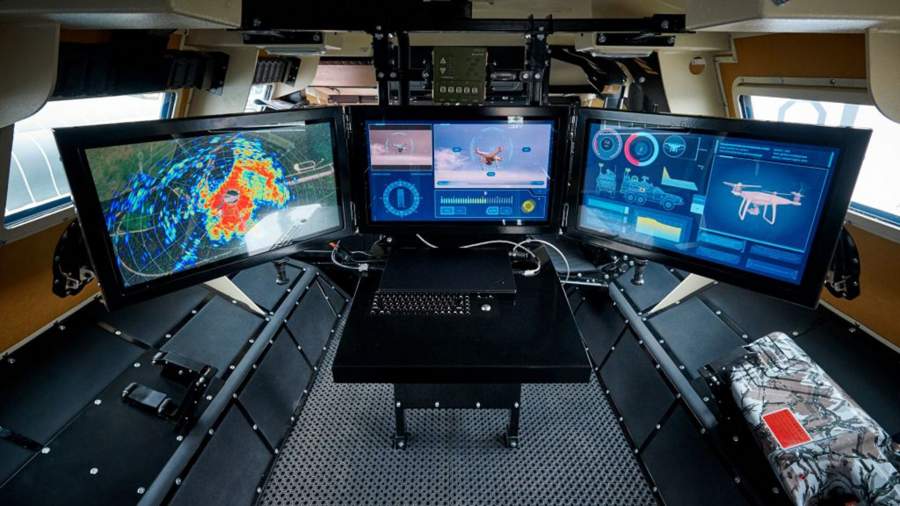 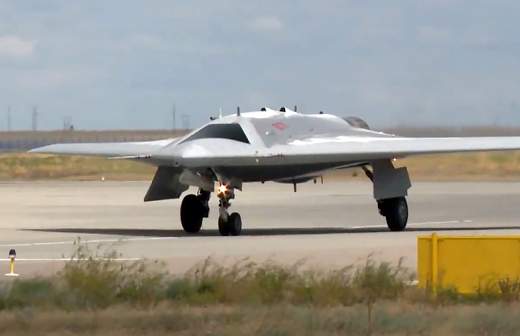 “Hunter” for a billion: the price of the most powerful drone in Russia has become known The cost of attack drones is approaching the prices for modern manned fighters

Not only to suppress communication and control channels of small drones, but also to physically destroy them, the Rat complex, represented by Ruselectronics, is capable of. Using radar and an optical location station, the armored three-axle vehicle can detect even miniature commercial drones in all weather conditions at a distance of up to 3.5 km. It is capable of destroying them with microwave radiation at a distance of a kilometer. A 1.5 kW laser installation is under development, which will burn UAVs at the same distance. Unlike anti-aircraft missile or artillery systems, such a vehicle can safely protect the skies over cities and civilian objects in peacetime.

There was increased attention to unmanned technologies at Army-2020. The loudest novelty was the presentation by Kronshtadt of full-size mockups of three new heavy drones of its own design at once: the two-ton Sirius, the four-ton Helios and the high-speed attack Sirius weighing 7 tons. It is not clear at what stage these developments are, but the company already has a successful experience in creating and putting into service the first Russian heavy reconnaissance and strike UAV “Orion”. 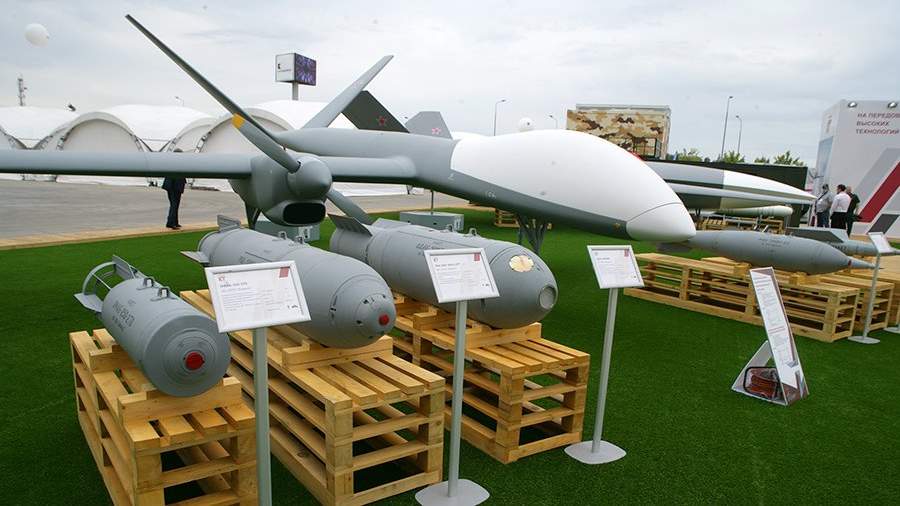 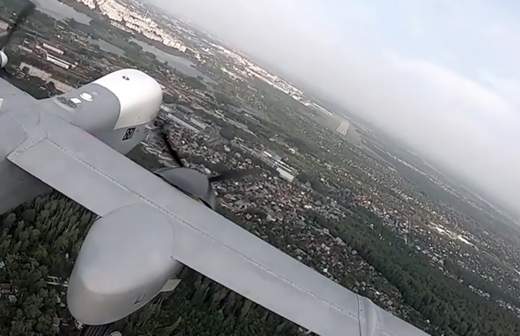 Kronstadt demonstrated an extensive line of light ammunition for UAVs with satellite, laser and television guidance. The company has combined warheads from Grad and Hurricane missiles with modern guidance systems, having received weapons with a caliber of 20 to 100 kg, which even a small drone can lift. Orion can carry up to six of these guided bombs or four guided missiles.

The Tactical Missile Armaments Corporation for the first time openly demonstrated the Thunder guided missiles. As Izvestia previously wrote, they are now being tested not only on airplanes, but also together with the heavy seven-ton Altius UAV. In terms of its power, the ammunition surpasses the standard five-hundred-kilogram bombs and is capable of striking targets at a distance of 120 km from the launch point.

“One of the main problems of our attack drones was the lack of suitable ammunition for them,” military expert Vladislav Shurygin told Izvestia. – At this year’s exhibition it is noticeable that the task of creating them in the defense industry was taken seriously. Now there are heavy missiles for UAVs, capable of hitting any target, and light inexpensive bombs, which are quite enough to destroy a pickup truck with a machine gun or a firing point. 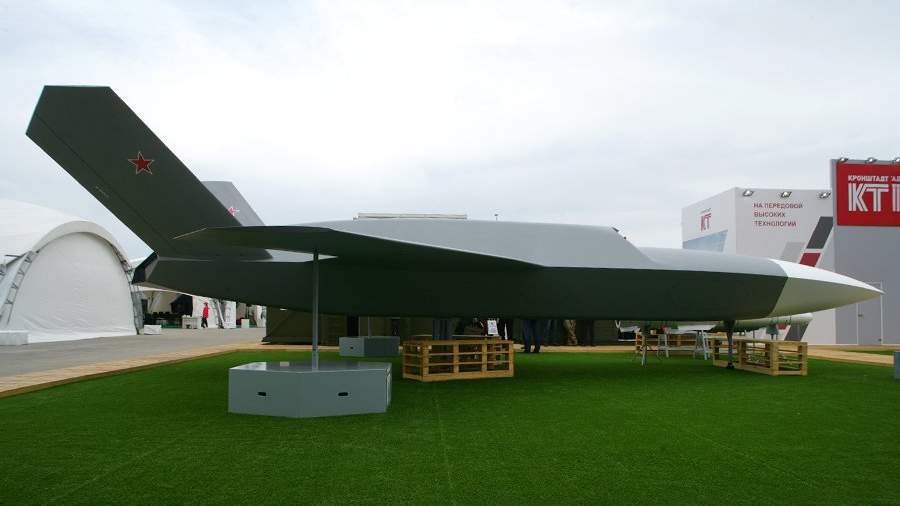 Strike unmanned aerial vehicle (UAV) “Thunder”, designed for the use of aviation weapons in an intense combat clash at the international military-technical forum “Army-2020” 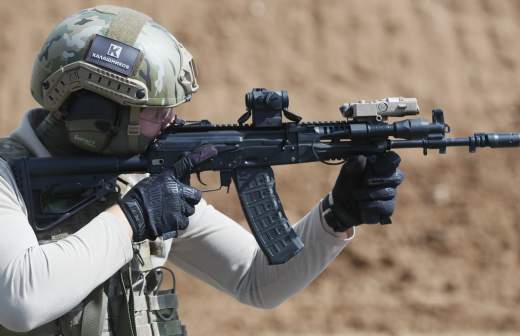 “Kalashny” in a row: the Far Eastern military will be armed with the latest AK-12 assault rifle to be tested by the harsh climate and ingenuity of Russian soldiers

A large-scale exposition was presented by the military innovative technopolis “Era”. The research and production complex created two years ago brought 63 exhibits to the exhibition and concluded cooperation agreements with 30 enterprises. Military scientific companies, staffed with conscripts, play an important role in the work of the technopolis. They are entrusted with both the creation of software and participation in scientific developments, including the fifth-generation fighter Su-57 and the modernization of the MiG-31BM.

Defense Minister Sergei Shoigu announced the conclusion of contracts worth 1.16 trillion rubles for Army 2020. But this year, the military department did not disclose the parameters of most of the major transactions, in particular the amount of equipment ordered. Only the purchase of 500 new samples and over 80 thousand missiles and ammunition has been announced. In addition, over 100 weapons will be repaired and modernized. 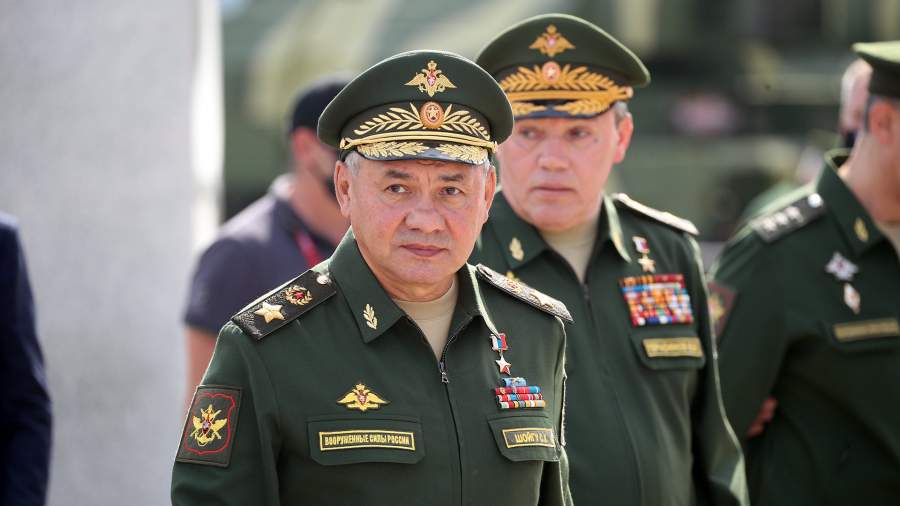 More than fifty T-80BV tanks are being upgraded to the T-80BVM level by the enterprises of the Uralvagonzavod concern. A contract was also signed with them for the renewal of an unnamed number of BRM-1K command combat reconnaissance vehicles. 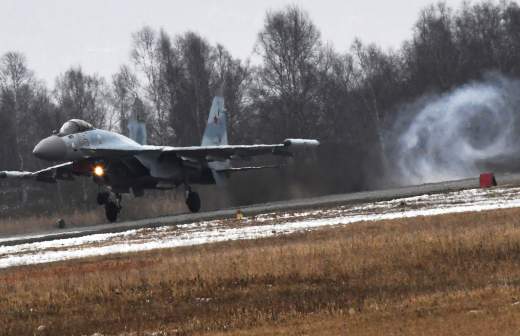 Among the purchases for the Aerospace Forces, there are contracts for Su-35S and Su-30SM2 fighters, Su-34 bombers, Yak-130 jet trainer aircraft and DA-42T trainer aircraft, Il-76MD-90A transport aircraft. For the first time, new light Il-112 transports have been ordered.

It was not reported about the conclusion of a contract for the modernized Ka-52M attack helicopters, although it was previously announced about the intention to sign an agreement this year for the supply of 114 machines of this type to the Ministry of Defense.

Among the announced contracts for the Navy is the construction of Project 22350 frigates and Project 20380 and 20385 corvettes.

“Project 22350 is the most complex and perfect of the surface ships of Russia,” military historian Dmitry Boltenkov told Izvestia. – When creating and putting into series with them there was the most torment, the first samples were built for a long time. But now most of the problems have been resolved. Then things should go faster. Corvettes of the “Guarding” type are workhorses, but even with their production there were delays. Now their construction has been accelerated. Most likely, we are talking about eight new ships of this project, most of which will go to the Pacific Fleet. 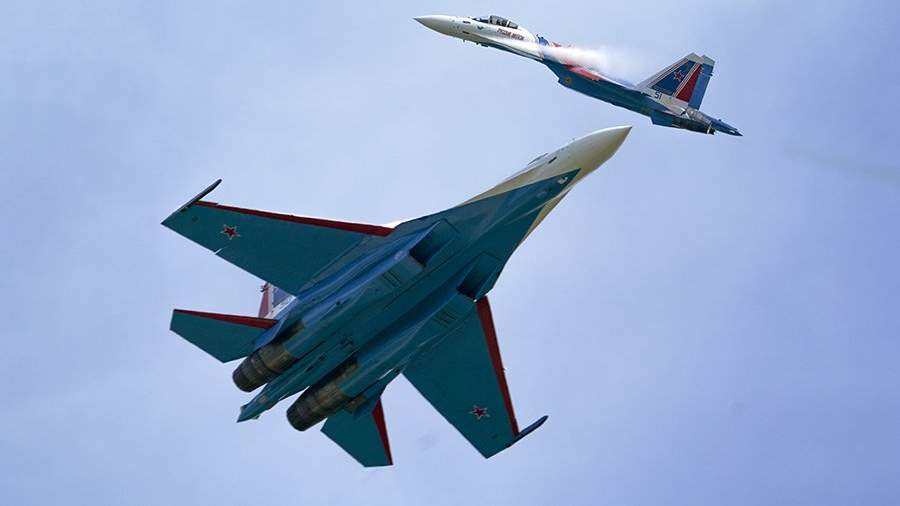 Another submarine with an air-independent propulsion system of Project 677 and a diesel one of Project 636.3 has been ordered by Admiralty Shipyards. The Ministry of Defense signed a contract with the Zvezdochka Ship Repair Center for the repair and modernization of Project 971 multipurpose nuclear submarines.

Among the announced contracts for the Navy is also the development of a universal helicopter for warships. The Ministry of Defense wants to get a new vehicle that can not only carry cargo and passengers, but also perform anti-submarine, search and rescue and combat missions. The new aircraft should replace the current Ka-27 and Ka-29 helicopters.