The supply of the latest missiles for the Tornado-G multiple launch rocket systems has begun. They not only reach the target area with particular accuracy, but also hit the object with detachable warheads. The latter on a stabilizing parachute fall on the target almost vertically, so it is difficult to defend against them. Such ammunition easily destroys armored vehicles, manpower and even field fortifications, experts said. These missiles are two-stage and can strike targets from different directions and angles.

A high-precision missile of a new design has been created for the Tornado-G multiple launch rocket systems. It has already been tested, put into service and supplied to the troops, sources in the military department told Izvestia.

New ammunition makes it possible to fire a salvo from one launcher at several targets at once, or to focus the fire of several multiple launch rocket systems on one. This is why a two-stage scheme is used instead of the traditional one-stage one. In addition, the missiles have a detachable warhead, which makes it impossible to intercept them with modern air defense systems. The ammunition allows you to hit objects even in shelters and behind the opposite slopes of heights – this is beyond the power of ordinary “Hail”. 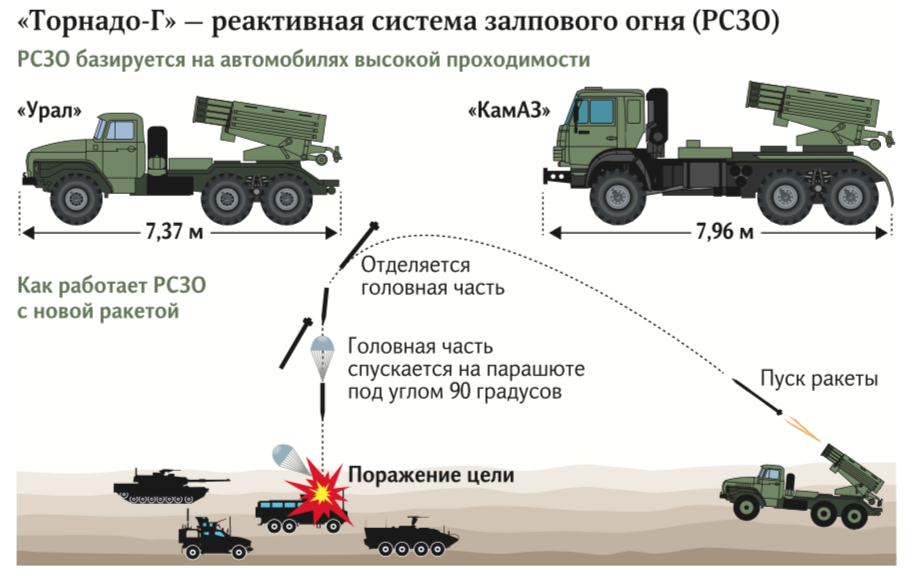 As Izvestia previously wrote, 300-mm missiles from the Tornado-S heavy multiple launch rocket systems, which are now being replaced by the famous Tornadoes, have the same capability. 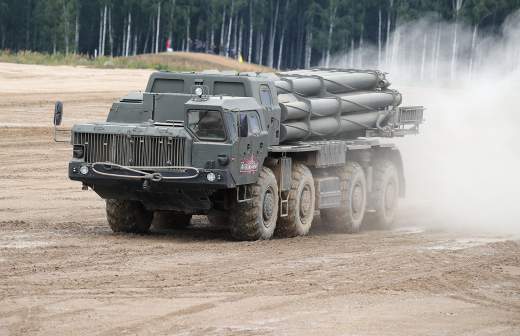 Knock out in one gulp: new rocket systems appeared in Kaliningrad Artillerymen of the coastal forces of the Baltic Fleet received a division of MLRS “Smerch”

Earlier, the Ministry of Defense announced the first use of new missiles for the Tornado-G with a detachable warhead as part of the Kavkaz-2020 exercise. According to the military, on a stabilizing parachute, such ammunition falls on the object almost vertically. Thanks to this, a high degree of destruction of targets behind shelters is ensured. During one of the episodes of the exercise, which was played out at the Prudboy training ground near Volgograd, rocket artillery defeated the armored vehicles of a simulated enemy. At this stage, more than 20 Tornado-G MLRS were used. As a result, over 15 armored vehicles were destroyed.

– With a conventional shelling, a person can run to cover and hide within 40 seconds. Under the fire of a rocket launcher, this is almost impossible, it releases projectile after projectile with an interval of less than a second, ” the expert explained. – In addition, when using MLRS, a seismic wave is created, which destroys dugouts and other shelters.

The general stressed that modern jet systems and high-tech ammunition for them could appear because work on their development has been carried out continuously over the past decades. Even in the financially most difficult years, fundamental research and design development did not stop, and the research institutes and design bureaus were able to retain their human resources.

“Prima” from the Union

At the time of the Soviet Union and after its collapse, attempts were also made to replace the Grads. The creation of a successor to the famous system was initiated by the Council of Ministers of the USSR back in 1976. In the late 1980s, the Prima MLRS developed at NPO Splav was put into service and limited supplies of it to the troops began. The installation had an increased number of guides compared to its predecessor: 50 versus 40. New 9M53F missiles were also created for it. with a detachable warhead, which was equipped with a small jet engine and a parachute. She could attack targets, also falling on them almost vertically – at an angle of 85-90 degrees. In combination with a remote fuse, which could be programmed to the desired detonation height, this increased their combat effectiveness. 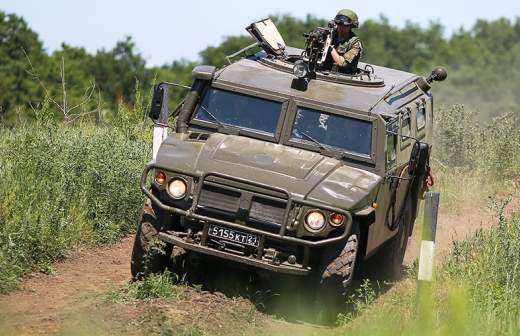 The developers stated that 5-19 times fewer Prima installations with new ammunition are required to hit the same target than conventional Grad MLRS. However, due to the financial situation in which the army was in the early 1990s, the installation did not go into a large series and was withdrawn from the units that managed to receive it.

The replacement of the Grads came only in 2014, when the 9K51M Tornado-G system was adopted. The group of its creators in 2015 was awarded the prize of the Russian government. The main difference between the new “Tornado-G” was an automated fire control system and preparation for launching shells. The satellite navigation subsystem included in it allows you to accurately track the coordinates of each combat vehicle and calculate all the necessary data to open fire. Information about the location of the enemy can not be entered manually, but can be obtained from drones, technical reconnaissance equipment, or from the automated control system of a higher headquarters. This is what makes it possible to radically increase the accuracy of the MLRS in comparison with the Grad and Prima. It is planned that by the end of this decade, all units of the MLRS will be rearmed from the Grad combat vehicles to the newest Tornado-G.

One of the advantages of the system was the use of several types of ammunition at once. Among them, for example, an extended-range unguided missile capable of hitting a target within 40 km. This is twice as much as the ammunition for the Grad. Included in its ammunition and a missile with a cluster warhead with fragmentation-cumulative submunitions. They are capable of penetrating armor up to 140 mm thick. This is more than the thickness of the armor of modern tanks at the top, where the new missiles attack.