The Ministry of Defense has completed the formation of the first mobile anti-aircraft missile brigade in the Far East. In the near future, she will take over in full force on experimental combat, and then on combat duty, sources in the military department told Izvestia. The compound of the Eastern Military District (VVO), located in the Jewish Autonomous Region, is armed with ultra-long-range anti-aircraft systems S-300V4, which will provide anti-aircraft and anti-missile defense. Unique maneuverability allows you to quickly transfer the brigade to any place in the Far East and Siberia. Experts believe that the strengthening of air defense was a response to the growing US activity in the Asia-Pacific region.

The upgraded S-300V4 systems will cover the troops from the attacks of both drones and ballistic missiles (BR) of the enemy, in the places of their concentration and on the march. Unlike the S-300 and S-400, which are in service with the aerospace forces, the army complexes are installed on an all-terrain tracked base.

Earlier, the Ministry of Defense reported that the personnel of the brigade, after the completion of its formation, was trained at a training center in Orenburg. Then, on standard equipment, he successfully fired at the Kapustin Yar range at targets of the “Saman” type, imitating small-sized fast-flying targets. After the exercises, military equipment was loaded onto platforms and sent to the place of permanent deployment in the Jewish Autonomous Region. 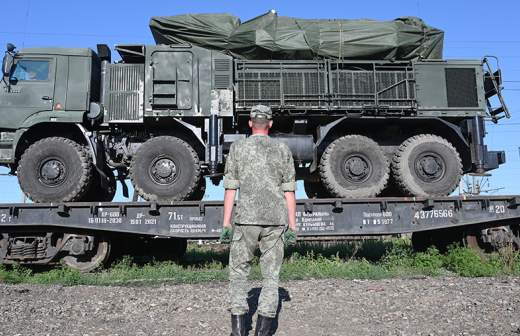 As Defense Minister Sergei Shoigu said last week, the military-political situation in the Eastern strategic direction remains tense. Dmitry Peskov, the press secretary of the Russian president, specified that the increased military activity of extra-regional powers contributes to instability there. Earlier, among the threats to Russia in the Far East, the defense department called the increase in the influence of the United States and its allies in the Asia-Pacific region, aimed at weakening the positions of Russia and China in Southeast Asia.

To neutralize the emerging threats in the Eastern Military District, the Ministry of Defense is also carrying out the rearmament of the air defense system. In addition to creating a new brigade, it is planned to equip two regiments with S-400 systems by the end of the year, as well as transfer two anti-aircraft missile divisions to the Buk-M1-2 complexes.

Earlier, Izvestia reported that it is planned to include batteries of Pantsir-SM-SV anti-aircraft missile and cannon systems in the air defense units of the ground forces equipped with S-300V4 systems. It has not yet been announced whether the new brigade will receive them.

“Judging by the intensity of reconnaissance flights in the Pacific region, the Americans have recently significantly strengthened their grouping there,” Colonel Vladimir Anokhin, vice president of the Academy of Geopolitical Problems, told Izvestia. – We must not forget that an entire American fleet is dangling across the Pacific Ocean in constant readiness. The fact that mobile air defense forces are deployed in the region will give us the opportunity to create groups in dangerous directions. This is a significant boost, which gives many people a reason to think about whether to climb into this region.

According to the reports of the Russian military, the number of visits by American strategic bombers to the airspace over the Sea of ​​Okhotsk has also become more frequent. To do this, they use a narrow corridor of neutral international space between the Kuril Islands. Flights of US strategic aviation along Kamchatka and the country’s east coast in the Bering Sea have also become regular.

The development of the S-300V system was completed in the late 1980s of the last century. It was a response to the massive appearance in NATO countries in Europe of tactical and operational-tactical ballistic missiles with nuclear warheads. The S-75, “Krug”, “Buk-M1” complexes, which were then in service with the military air defense systems, were not able to protect the troops from attacks with such weapons.

Unlike the early S-300P models for the air defense system, the army S-300Vs were designed from the very beginning with the ability to destroy not only enemy aircraft, but also ballistic missiles. They paid no less attention to the issues of ensuring anti-missile defense than anti-aircraft defense. 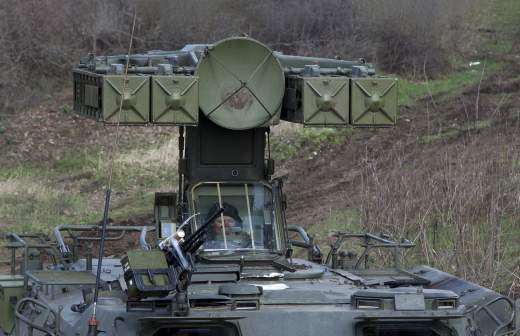 Due to the requirements of the ground forces for mobility, a variant of the “three hundred” was developed for them on a tracked base, which is not inferior in cross-country ability to tanks and infantry fighting vehicles. The systems were supposed to move with the troops and be located close to the front line in order to cover key military facilities from enemy attacks, including from nuclear weapons.

A feature of the complex was the use of two different missiles on it at once. “Heavy” is designed to destroy operational-tactical ballistic missiles and priority air targets at the maximum range. “Light” perform the main part of the tasks of protecting troops from aviation and short-range ballistic ammunition.

Progress in the element base and rocketry allowed in the new century to carry out a deep modernization of the system. She received sensitive and accurate active phased array radars. Updated ammunition has expanded the interception range. The use of modern computers made it possible to automate many combat processes and to rob the complex.

The start of deliveries to the troops of the first brigade of the most modern modification of the S-300V4 was announced in 2014. According to the general director of the Almaz-Antey concern, Yan Novikov, the area covered from air strikes has grown two to three times compared to the previous model. The maximum range of damage has also increased significantly. This made it possible to guarantee the interception of the warheads of ballistic missiles with a range of up to 2500 km.

The S-300V4 is capable of striking aircraft at a distance of up to 400 km and an altitude of 30 km. One division covers an area of ​​at least 2,500 sq. km. At the same time, it can fire at 24 air targets, directing two missiles at each, or 16 ballistic missiles. The anti-aircraft missile brigade includes at least two such divisions.