The 2S35 “Coalition-SV” ultra-long-range howitzers will enter service with the Southern Military District. Now the tests of an experimental batch of these unique weapons are being completed, firing 70 and more kilometers with new high-precision shells. In terms of their capabilities, they are twice as high as modern domestic and foreign samples. The buildup of long-range artillery forces in the south of the country will be a response to the strengthening of NATO’s presence in the region, experts say.

Coalition-SV howitzers will soon enter service with one of the formations of the Southern Military District (YuVO), sources in the defense department told Izvestia. They will strengthen the artillery fist assembled in the south of the country.

At the end of December last year, at the collegium of the Ministry of Defense, the commander of the Southern Military District reported on the rapid pace of rearmament. According to General of the Army Alexander Dvornikov, the share of modern technology in it has reached 70%. In 2020, new artillery and missile brigades have been formed. Earlier, Defense Minister Sergei Shoigu called the threat to Russia from the outside as the reason for the strengthening of the Southern Military District. 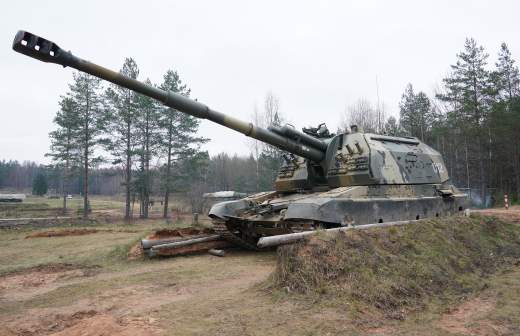 A powerful and long-range self-propelled artillery unit (ACS) is part of a project to re-equip the Ground Forces with the latest armored vehicles. It was developed in parallel with the promising platforms Armata, Kurganets-25 and Boomerang. The creation of the howitzer is at its final stage. Its prototypes are already on display at parades in Moscow and are being tested by the troops.

Now a pre-production batch of ten Coalition-SV units is being tested in the 1st Tank Army of the Western Military District. Rostec State Corporation announced the delivery of these weapons to the army in May last year.

“In our country, all the latest equipment goes first to the Southern and Western military districts, which border NATO countries,” military expert Vladislav Shurygin told Izvestia. – And it is in the south that we now have the most changes in the Ground Forces. Artillery has always been a strong point of our army, and highly effective Coalitions will continue that tradition. Their range is two to three times greater than the models currently in service.

The reasons for sending new weapons to the south are clear, the expert said. The military-political situation in the Black Sea region is becoming more and more tense. Here NATO forces are being strengthened and the bloc’s military presence is being built up. The warships of the North Atlantic Alliance regularly enter the Black Sea. The flights of reconnaissance aircraft and drones along the borders of our country have intensified. In addition, the border with Ukraine and the Caucasus are in the area of ​​responsibility of the Southern Military District, Vladislav Shurygin recalled.

The main advantage of the new SPG was the 152 mm long 2A88 cannon. Thanks to her, the firing range of the “Coalition” with existing shells has already increased to 70 km. This is much more than other systems in service. A conventional self-propelled gun 2S3 “Akatsia” hits at 17 km, and the most modern army self-propelled gun 2S19M2 “Msta-SM” hits targets almost 30 km away.

As Izvestia previously reported, even more long-range and adjustable ammunition is being developed and tested for the promising Coalition. With them, the reach of howitzers should grow to at least 100 km. According to the military, the fighting qualities of the “Coalition-SV” are twice as high as other domestic and foreign ACS models of this caliber. 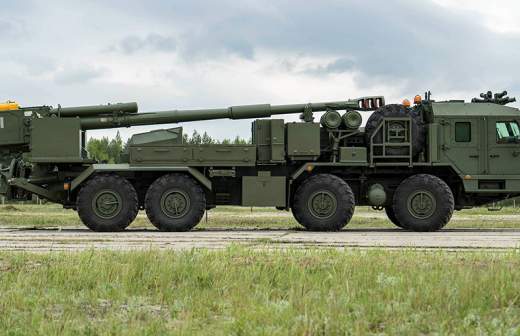 Flourishing of Malva: Convertible Howitzer Goes to Test A self-propelled artillery unit on a wheeled chassis will be the first in a new family of weapons systems

Initially, the Central Research Institute “Burevestnik”, where a new installation was developed, studied the possibility of making it a double-barreled one. This could dramatically increase the rate of fire. Then a variant of the classic single-gun scheme was chosen, but with an increased degree of automation. For the first time, a deserted fighting compartment was designed in it. The crew controls the shooting remotely. This provided a rate of fire of 10 rounds per second.

A feature of the self-propelled gun was the innovative “Flurry of Fire” firing mode. The control system is capable of simultaneously covering the target with several shells from one weapon. To do this, each of them is fired along a precisely calculated individual trajectory at different angles.

The defense department announced the completion of preliminary tests of the 2S35 “Coalition-SV” at the end of 2019. Now state tests are underway, as a result of which the development will receive approval for mass production.

In parallel with the traditional tracked version of the “Coalition-SV”, the development of a version installed on KamAZ trucks is underway. The howitzer retains all the advantages of a long-range gun and an automated combat module, and at the same time is more mobile when traveling on normal roads. It is planned that these powerful installations will strengthen motorized rifle brigades operating on wheeled armored vehicles.

Guns from the south

It is in the Southern Military District that the most active structural transformations have taken place in recent years. Here a new 8th Combined Arms Army was created and three divisions deployed along the border with Ukraine. The 22nd Army Corps was formed to protect Crimea. To equip them required the formation of new artillery and missile units. 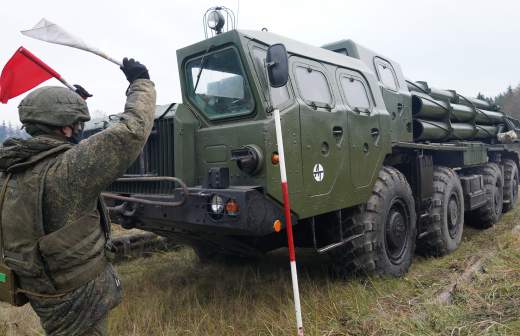 Fire controllers: how gunners are trained in Russia On the eve of the Day of Missile Forces and Artillery Izvestia visited the Mikhailovskaya Military Academy

In 2019, it was reported that an additional brigade was formed in the Astrakhan region, armed with Iskander-M operational-tactical complexes with a range of up to 500 km. In the past year, the creation of two more formations of missile forces and artillery was completed in the district.

Earlier, Izvestia reported that the newest version of the robotic and automated self-propelled howitzers Msta-SM is being delivered to the Southern Military District. The complete re-equipment of artillery formations on them should take one to two years.

At the Kavkaz-2020 command-staff strategic exercises that took place in September, the district tested all its novelties. They involved up to 200 pieces of artillery weapons. Including used complexes of high power – heavy 240-mm mortars “Tulip” and 203-mm self-propelled guns 2S7M “Malka”.

The Southern Military District was formed in October 2010 as part of a major reform of the structure of the Armed Forces. It included the North Caucasian Military District, the Black Sea Fleet, the Caspian Flotilla, and the 4th Air Force and Air Defense Command. He is also subordinate to three foreign military bases of Russia – in Armenia, Abkhazia and South Ossetia.