Russian servicemen at the Khmeimim airbase inaugurated the Alley of Engineering Troops and a memorial to the memory of sappers who died in local conflicts.

The alley was laid to coincide with the celebration of the 320th anniversary of the Russian engineering troops, which will be celebrated in January 2021.

“The engineers showed themselves in the Patriotic War of 1812, during the heroic defense of Sevastopol during the Crimean War, during the First World War. During the Great Patriotic War, engineering formations and units made an invaluable contribution to the great victory over fascism. Modern engineering troops are also in the forefront, performing tasks both in peacetime and in armed conflicts, ”said Lieutenant General Sergei Kuzovlev, Commander of the Russian Armed Forces in Syria, at the opening ceremony of the alley. 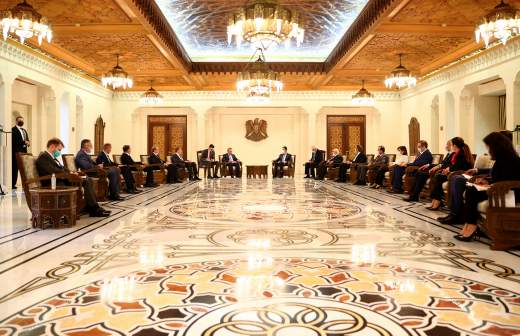 When tomorrow comes: what Russia will do in Syria after the end of the war The interaction between Moscow and Damascus is fraught with serious dangers for both countries

The alley has more than 40 trees that the servicemen planted after taking part in the all-Russian action “Garden of Memory”, within the framework of which 27 million trees were planted in 2020 in memory of the 27 million people who died in the Great Patriotic War.

According to Kamil Salimkhanov, chief of the engineering troops of the Russian Armed Forces grouping in Syria, spruces, palms, pomegranate and orange trees were planted in the alley.

“I think there will be several more types of trees here – for example, pyramidal fir trees will be planted around the memorial complex. The soldiers themselves bring and plant trees. There is still space on the alley, I think it will only expand, ”Salimkhanov told reporters.

The idea of ​​creating the alley and the memorial belongs to the sappers themselves. According to Salimkhanov, the servicemen carried out all the work themselves for two months and gradually added new elements to the project.

“We gathered here in the evenings and thought about what we would do. It all started with an alley with one small waterfall. Then we got a second waterfall, then a fountain, then a stream. Then we decided to put the equipment here as well. Everything was done by the hands of our soldiers, without any investments from the outside, ”explained the head of the engineering troops of the Russian Armed Forces grouping in Syria.

In the design of the alley, items were used that were brought by Russian sappers from the Syrian cities, where they carried out mine clearance. Thus, the fountain in the center of the alley is made from the body of the block of unguided rockets used in aviation, the memorial to the dead sappers is supplemented with elements of destroyed buildings, and the UAZ car discovered during the dismantling of rubble in the destroyed neighborhoods has been restored, supplemented with a mine detector and installed on a pedestal.

This is not the first monument at the Khmeimim base. At the Russian base, the memory of helicopter pilot Ryafagat Khabibullin and the nurses who died in Aleppo were immortalized, as well as a memorial sign and a stele in honor of the pilot of the Su-24 bomber Oleg Peshkov, who died while performing combat missions in Syria.